Wow. Been such a long time since I updated the blog. Its for a very good reason. Over the course of nearly two years, I’ve been hard at work on the sequel to “Merry Chrissy and the Naughty or Nice Truth”. Writing a book while working on a full-time job is certainly a tough task. I’m glad I endured the many tireless days and nights, adjustments here and there and the many illustrations that will accompany the story. This story as with all of my stories is a truly 100% individual effort. No publishers, no agents, no promotional budget and certainly no advance. Of course, its now up to the reader to discover the world of Merry Chrissy.

In an effort to keep the storyline in check with the sequel and forthcoming Merry Chrissy 3, some editing was done to the the first title originally released in 2014. Most changes with the story were cosmetic and minor, nothing too jarring. The bigger changes made were primarily with presentation. Namely with the quality of the illustrations in the digital eBook versions. Illustrations now have descriptions for accessibility. The eBooks were revamped from the ground up. If you have purchased “Merry Chrissy and the Naughty or Nice Truth” online before, the the FREE update will be available to download now. Of course, if you haven’t purchased the first book yet, I HIGHLY recommend doing so. The sequel “Merry Chrissy and the After Christmas Awakenings” starts where the first one ends. Reading the first book is absolutely crucial to fully understand Chrissy’s second adventure.

I’m introducing 4 new characters that will be featured in the newest Merry Chrissy adventure. Starting on Monday, December 5 and ending on Thursday December 8, a brand new character will be “unwrapped” for the world to see. On Friday December 9, the release or “unwrapping date” for “Merry Chrissy and the After Christmas Awakenings” will FINALLY be revealed. (Hint: It will be released in December, but sooner than you think depending on the type of device you have).

Every year, I do some Christmas art with my originals. Usually, it’s 1 major work I introduce before Christmas, but this year, I decided to do *THREE* This is the final of 3. The theme this year is song related. I chose these song titles that best fit my characters personalities.

Check out “All of Want for Christmas is My Two Front Teeth” featuring Maddie Mckenszie and “Have Yourself a Merry Little Christmas” featuring Princess.

Today features Chrissy Deigh, the star of my new book “Merry Chrissy and the Naughty or Nice Truth” representing the song “Give Love on Christmas Day”, originally performed by the Jackson 5 in 1970 for “The Jackson 5 Christmas Album”. A young Michael Jackson sings the vocals. Have a listen.

chose this song for a reason. Not only it represents the heart and soul of Chrissy, who enjoys the magic of Christmas year round, but it’s also the name of the final chapter of the book. Of course, you’ll need to read it to find out WHY.

Other R&B and Soul artists such as SWV, New Edition and my personal favorite Ledisi have covered the song over the years. If Chrissy had a theme song, Ledisi’s version of “Give Love on Christmas Day” would be it.

Making a book is hard. Doing it independently is even harder. These are the stories I want to share behind making “Merry Chrissy and the Naughty or Nice Truth.” 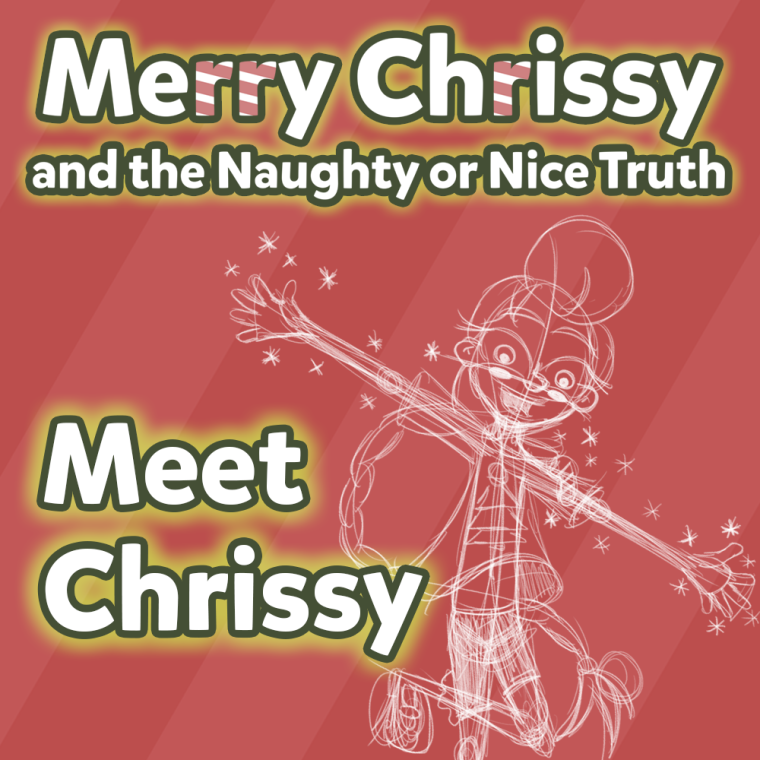 Today’s feature covers the titular character of the story, “Christina Emily Deigh” – Otherwise known as “Chrissy” for short. Throughout the majority of the book, Chrissy is portrayed as a 9-year-old girl who is obsessed with Christmas. She doesn’t celebrate it every day, but she enjoys it thoroughly. When it comes to Chrissy, her idea of watching Christmas specials and buying ornaments in July are a great time. However, there are many kids in her school, particularly one girl who bullies her constantly. The girl, named Charlotte Marigold, finds ways to push her buttons and nearly pushes Chrissy over the edge.

Even, when Chrissy is recruited by the North Pole to do a very important task, the magic she’s equipped with has it’s limits. Even if she bypasses those limits, there are consequences to her actions. That means she can’t use her magic to enact revenge on her tormentors. Chrissy’s traits are independent, quick witted, focused, naive and tempered at times. She deeply cares about her friends and family and is honest to them…to a point. The Christmas philosophy of being “good for goodness sake” is put to the test for Chrissy. She will make decisions that would instantly put her on the Naughty list, but she makes those choices because she feels it will bring forth change.

Before I took on the hobby of drawing again, I was watching the Super Bowl in 2010 and I thought up some ideas. What if there was someone who enjoyed the holidays, but never turned off the Christmas spirit year round? With “Christmas Creep” coming up earlier and earlier in stores (I saw Christmas Decorations for sale in AUGUST at a Walgreens last year!) and radio stations playing Christmas music non-stop right after HALLOWEEN (like WALK-FM here on Long Island), this ideal may not be so far fetched. I’m sure there are a LOT of people out there that are like Chrissy.

Early designs of Chrissy gave her a more simplified hair style. Her ponytail was basically 3 giant blobs instead of the twisted braid style I have now. The ornament was much larger and I reduced the size since I felt it might’ve been too unrealistic. From the start, I wanted to give Chrissy a modern, festive look that didn’t totally look out of place in July or March. Other than the Christmas Tree, the ornament dangling at the bottom of her ponytail and her brown Mary Jane shoes, her design is largely basic and mostly non-holiday. I absolutely did not want her to dress her up in striped stockings or make her look like she came out of Santa’s workshop at the mall. Less is more. Her design is functionally basic that compliments an active lifestyle with a hint of rebel – namely her midriff revealing shirt and left shoulder and the long ponytail that goes down to her knees.

The character design is somewhat inspired by a character named “Edward” from the Anime series “Cowboy Bebop”. I initially wanted to make Chrissy barefoot, but having her barefoot wouldn’t work in the story. Another wild idea was giving Chrissy a Penguin as a pet…then I researched about them. Trust me, you DON’T want to have a penguin as a pet! There’s a reason why they have their own habitat in aquariums. I sticked to a pet mouse named “Stirring” instead.

Merry Chrissy and the Naughty or Nice Truth is a middle-age grade novel designed for ages 9 and up that will be released on December 5th, 2014. Go to www.merrychrissy.com For the latest updates. You can also follow Merry Chrissy on Twitter and Google Plus.