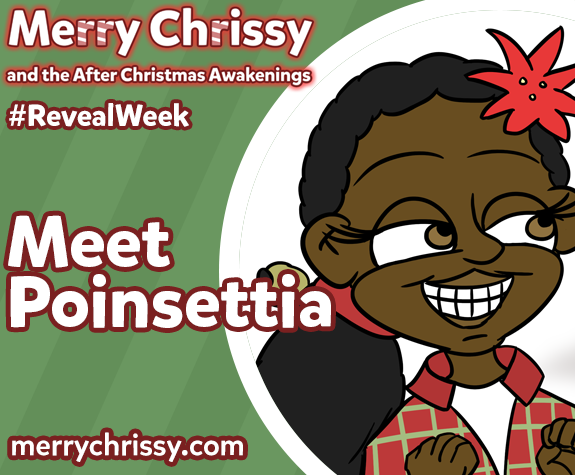 After quite a magical adventure in “Merry Christmas and the Naughty or Nice Truth”, 9-year old Chrissy Deigh is completely heartbroken that the most magical day of the year will be 1 year away once again. Christmas Day may be over, but Chrissy’s story is just getting started.

There are 4 brand new characters in the second installment of the Merry Chrissy series. Today, I will introduce Poinsettia. You can see my other characters reveals in the blog archive.

Poinsettia brings a warm southern charm and style to the North Pole. A country girl by heart with a southern twang. As a former lister, Poinsettia returns to train new recruits the ways of checking the list of kids 1-92. Little do people know, there is a deeply upsetting issue that Poinsettia is unable to reveal. Let’s just say that Chrissy is not the first kid ever to work for the North Pole. (Did I say too much?)

Poinsettia’s attitude is different from most workers of the North Pole. She’s quite friendly, to the point of being too friendly at times while greeting people. (Go ahead and ask Chrissy and tell her why?) Her wardrobe speaks for her southern sensibilities. Flannel shirt, shorts and cowboy boots. Of course, you can’t forget that Poinsettia on her ponytail. Despite a tragic incident involving a former trainee, Poinsettia is still devoted to upholding the traditions of North Pole Incorporated.

“Merry Chrissy and the After Christmas Awakenings” is a middle grade novel for ages 9 and up. It will be available for purchase December 2016. Go to merrychrissy.com or follow my social media for the latest updates. 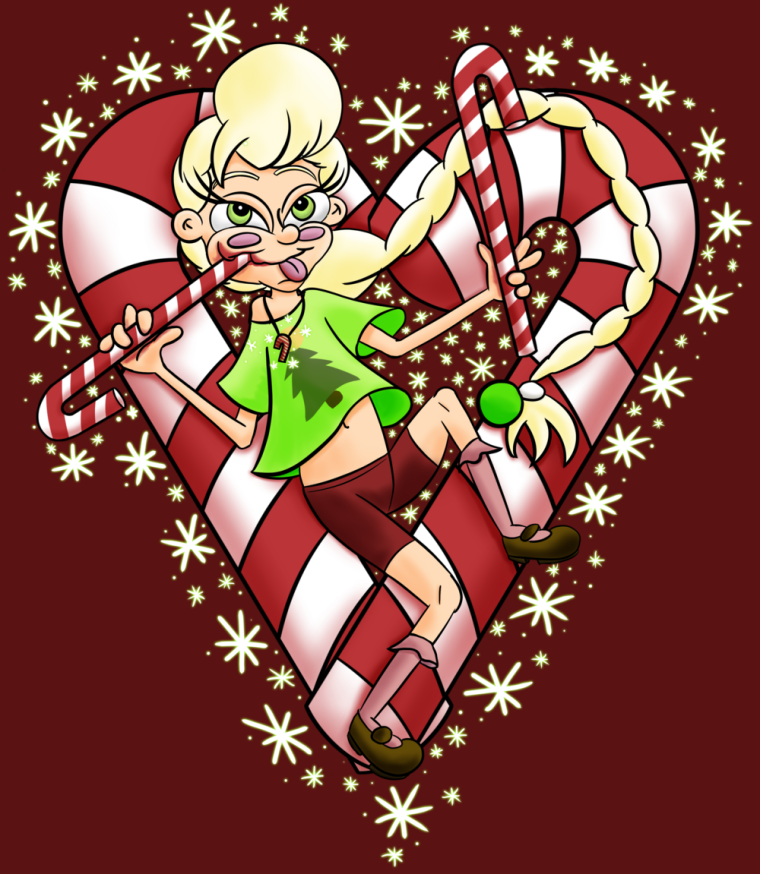 Wow. Been such a long time since I updated the blog. Its for a very good reason. Over the course of nearly two years, I’ve been hard at work on the sequel to “Merry Chrissy and the Naughty or Nice Truth”. Writing a book while working on a full-time job is certainly a tough task. I’m glad I endured the many tireless days and nights, adjustments here and there and the many illustrations that will accompany the story. This story as with all of my stories is a truly 100% individual effort. No publishers, no agents, no promotional budget and certainly no advance. Of course, its now up to the reader to discover the world of Merry Chrissy.

In an effort to keep the storyline in check with the sequel and forthcoming Merry Chrissy 3, some editing was done to the the first title originally released in 2014. Most changes with the story were cosmetic and minor, nothing too jarring. The bigger changes made were primarily with presentation. Namely with the quality of the illustrations in the digital eBook versions. Illustrations now have descriptions for accessibility. The eBooks were revamped from the ground up. If you have purchased “Merry Chrissy and the Naughty or Nice Truth” online before, the the FREE update will be available to download now. Of course, if you haven’t purchased the first book yet, I HIGHLY recommend doing so. The sequel “Merry Chrissy and the After Christmas Awakenings” starts where the first one ends. Reading the first book is absolutely crucial to fully understand Chrissy’s second adventure. 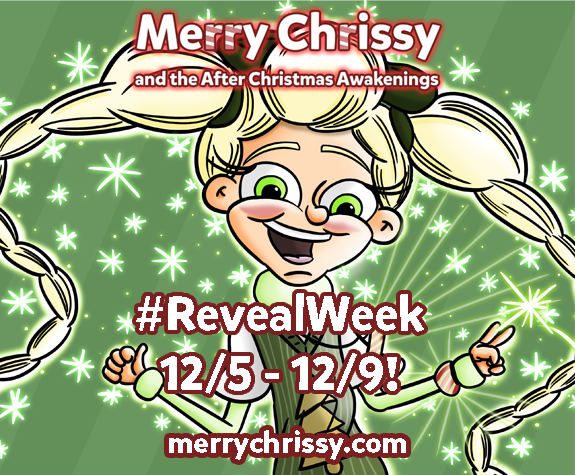 I’m introducing 4 new characters that will be featured in the newest Merry Chrissy adventure. Starting on Monday, December 5 and ending on Thursday December 8, a brand new character will be “unwrapped” for the world to see. On Friday December 9, the release or “unwrapping date” for “Merry Chrissy and the After Christmas Awakenings” will FINALLY be revealed. (Hint: It will be released in December, but sooner than you think depending on the type of device you have). Every year, I do some Christmas art with my originals. Usually, it’s 1 major work I introduce before Christmas, but this year, I decided to do *THREE* This is the final of 3. The theme this year is song related. I chose these song titles that best fit my characters personalities.

Check out “All of Want for Christmas is My Two Front Teeth” featuring Maddie Mckenszie and “Have Yourself a Merry Little Christmas” featuring Princess.

Today features Chrissy Deigh, the star of my new book “Merry Chrissy and the Naughty or Nice Truth” representing the song “Give Love on Christmas Day”, originally performed by the Jackson 5 in 1970 for “The Jackson 5 Christmas Album”. A young Michael Jackson sings the vocals. Have a listen.

chose this song for a reason. Not only it represents the heart and soul of Chrissy, who enjoys the magic of Christmas year round, but it’s also the name of the final chapter of the book. Of course, you’ll need to read it to find out WHY.

Other R&B and Soul artists such as SWV, New Edition and my personal favorite Ledisi have covered the song over the years. If Chrissy had a theme song, Ledisi’s version of “Give Love on Christmas Day” would be it.

Every year, I do some Christmas art with my originals. Usually, it’s 1 major work I introduce before Christmas, but this year, I decided to do *THREE* This is the second of 3. The theme this year is song related. I chose these song titles that best fit my characters personalities. If you missed “All I Want for Christmas is My Two Front Teeth”, check that one out first.

Today, we feature Princess, a friend of Maddie’s big sister Margaret, who really doesn’t star in anything…yet. (She does have a cameo in both “Maddie Mckensize” books however) representing the song “Have Yourself a Merry Little Christmas”.

The song was released in 1944 for the movie “Meet Me in St. Louis”, performed by Judy Garland. Considering the context of the movie, this song in it’s original form is kind of a downer. In 1956, Frank Sinatra performed this song for his album “A Jolly Christmas”. Some lyrics of the song were changed to be more positive and upbeat. For example, the original lyrics “Until then we’ll have to muddle through somehow” was changed to “Hang a shining star upon the highest bough.”

In 2007, the song was ranked as the 3rd most popular performed song by ASCAP in the last 5 years.

Here is the original version from the movie. What a meltdown at the end. 😦

And here is the version made famous by Frank Sinatra.

Every year, I do some Christmas art with my originals. Usually, it’s 1 major work I introduce before Christmas, but this year, I decided to do *THREE* This is the first of 3. The theme this year is song related. I chose these song titles that best fit my characters personalities.

First up, little Maddie, the title character who appears in my picture books “Maddie Mckenszie: The Most ANNOYING Little Sister EVER.” and “Maddie Mckenszie an the BAD Birthday Party Manners”

The song she represents, titled “All I Want for Christmas is my Two Front Teeth” is a song written by Donald Yetter Gardner in 1944 in Smithtown, NY on Long Island. While teaching a second grade class asking what they wanted for Christmas, Donald noticed that everyone spoke in a lisp due to a missing tooth. Thus the song was born, written in only 30 minutes. This Christmas song is pretty unique, as it only can be sung convincingly by children…and hockey players.

Don’t take my word for it, have a listen.

Merry Christmas to all from Maddie Mckenszie!