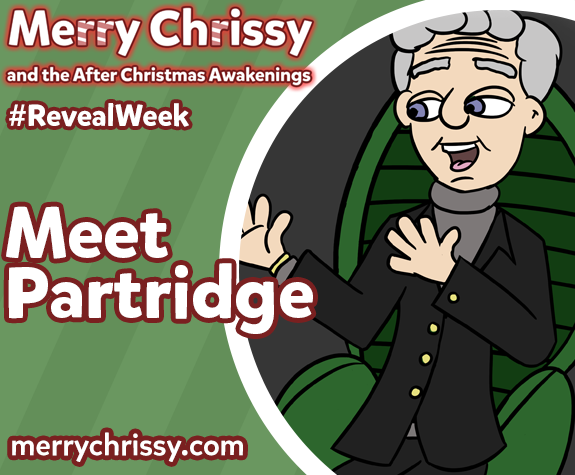 After quite a magical adventure in “Merry Christmas and the Naughty or Nice Truth”, 9-year old Chrissy Deigh is completely heartbroken that the most magical day of the year will be 1 year away once again. Christmas Day may be over, but Chrissy’s story is just getting started.

There are 4 brand new characters in the second installment of the Merry Chrissy series. Today, I will introduce Partridge Pear. You can see my other characters reveals in the blog archive.

Partridge Pear is a character that is very much determined to be a successful businessman and dissatisfied with the taste of failure. Following in the footsteps of his father who helped modernize the North Pole as “North Pole City”, Partridge controls a vast business empire that’s exclusively involved with the “Merry Metropolis”. His magical power company founded by his father keeps the city running and from freezing to death at the same time with a shield of magic surrounding the city limits. His consumer electronics division however is lagging behind a hip and plucky upstart.

Partridge’s trump card to steal attention (and business) away from his competition is a revolutionary product that allows people to use Christmas Magic in daylight. (Christmas magic in the world of “Merry Chrissy” can only be used at night.) Thanks to some connections, Partridge enlists the help of none other than Chrissy Deigh to push and promote the wearable magical bracelet.

Partridge is a graying man in his 60’s who’s accomplished a lot in his life. He inherited a business from his father that is doing well, but not well enough to his standards. He realizes that the extraordinary popularity of Chrissy in the North could lead to something bigger. He harnesses the excitement about this magical Christmas girl just to promote his brand new product which is rather exploitive I might add. You may think he’s a “Steve Jobs” type of person, but I consider him more of a “Steve Ballimer” type of person…without the angry outbursts laced with curse words and jumping up and down like a monkey.

“Merry Chrissy and the After Christmas Awakenings” is a middle grade novel for ages 9 and up. It will be available for purchase December 2016. Go to merrychrissy.com or follow my social media for the latest updates.